Paterson is the latest film written and directed by Jim Jarmusch. It takes its title from both the name of the industrial town in which the film is set, and the name of the protagonist, a young bus driver (Adam Driver) who harbours a private passion for poetry.

This is a gentle film, it doesn’t rush or have moments of great drama. Its about relationships, self doubt, personal passions and is an ode to poetry itself. One does not need to have an interest in poetry to enjoy this film, and if you don’t, that’s a good reason to give it a try.

The film centres around Patersons daily life and the relationship he has with girlfriend (Golshifteh Farahani). The film’s is divided into days of the week, giving the film a steady rhythm and also emphasises the importance routine plays in Paterson’s life. Each morning we watch him wake up and leave a trail of kisses on the face and arms of the woman that he loves, before driving the his bus route and ending each night in his local bar. Adam Driver’s acting is understated, his character doesn’t demand attention and is somewhat introverted. He spends most of his working day in silence, listening to the conversations others are having on the bus. The first time we hear his voice is through his internal monologue. Whilst eating his breakfast he begins to observe a box of matches and so a poem slowly comes to life.

Repeating the opening line as he goes about his day, adding, editing, scribbling in his notebook. As he reciets his poems, music fades in and his handwriting scrawls across the screen. We find ourselves getting caught up and carried away with the piece he is creating, until both the viewer and him are snapped out of the trance by some in film interruption.

The quality of the poems fits the mood of the film and character nicely. They feel neither over simplistic or highbrow and are a pleasure to listen Adam read with his deep and relaxing voice. 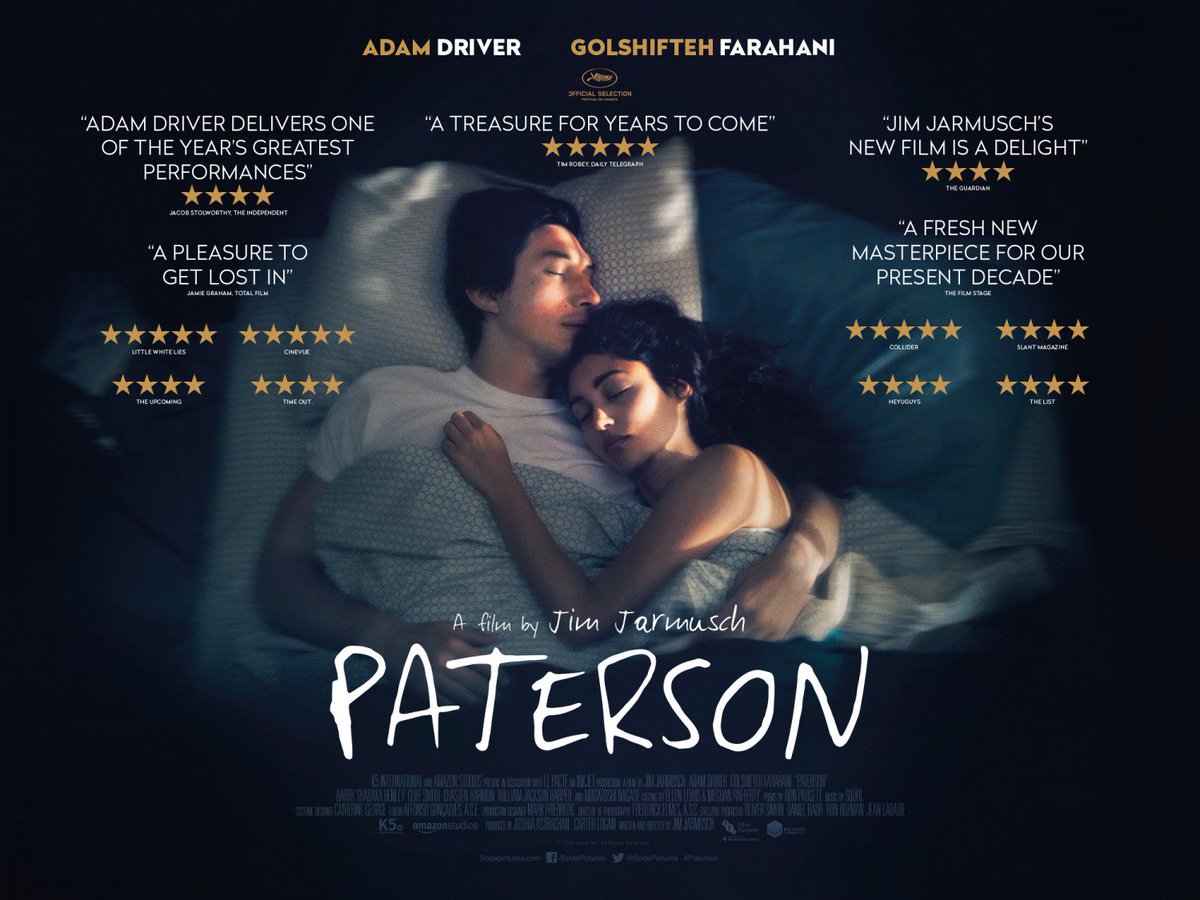 The relationship between the central couple and their trusty bulldog keep a warmth and liveliness to the film. She is bursting with energy and is forever encouraging to him to publish his work and share his skill with the world but he has reservations. His introversion and doubt is balanced by her extraversion and willingness to act. She appears to have a new pursuit each day, whether it be painting, learning the guitar or selling cupcakes, she is forever optimistic and never constrained by doubt.

The film has traditional highs and lows which I wont spoil and a slight air of surrealism as he beings to notice repeating images and strangers sparking up conversations with him about poetry.

All in all a refreshing change from typical action packed or melodramatic plot twisting film and in this fast paced, news feed pawing, meme sharing times, its nice to see poetry being given some TLC.

We have plenty of matches in our house.

We keep them on hand always.

though we used to prefer Diamond brand.

That was before we discovered Ohio Blue Tip matches.

They are excellently packaged, sturdy

little boxes with dark and light blue and white labels

with words lettered on the shape of a megaphone,

as if to say even louder to the world,

“Here is the most beautiful match in the world,

its one and a half inch soft pine stem capped

by a grainy dark purple head, so sober and furious

and stubbornly ready to burst into flame,

lighting, perhaps, the cigarette of the woman you love,

for the first time, and it was never really the same

after that. All this will we give you.”

That is what you gave me, I

became the cigarette and you the match, or I

the match and you the cigarette, blazing

with kisses that smolder toward heaven.